A couple of months back my beautiful bride to be asked if we could rehome an older cat.

Tina had visited Ty Nant cat sanctuary to hand over provisions for the animals.

Tee is a huge animal lover and part of the reason why she is so special to me.

Tee was asked if she wanted to look at the cats currently looking for a home.  She was taken into the kitten room.  It was a beautifully sad scene of all these kittens needing to be rehomed. Miaows aplenty.

She resisted knowing that our own Bonnie at 16 wasn’t ready for an energetic kitten messing her retirement pleasures of eating and sleeping!

Aha thought the owner, let me show you the older cats who need a good home.

Tee described walking into the room and her heart sank.  No one really wants to take on an older cat, people naturally go for the kittens.

There was one cat hitting 20, could barely move but would try and come over for a cuddle.  Who said cats are cold.

One cat though jumped down and ran over leaping onto tees lap.

This was the cat that tee asked me for us to have.  Her name was Gypsy and named for good reasons.

Gypsy knew tee was the one she wanted to go home with, instant connection.

I like to think she sensed the goodness in tee and thought yep, you’ll do for me.

Gypsy loves food and a fuss, whenever she is stroked she let’s out a crackly miaow.

She was named Gypsy as she was found roaming.  She was found with no fur, her skin was sunburnt.  She’s got just one tooth that means her tongue pokes out.

We don’t know how she survived but Ty Nant took her in, cared for her.  Her fur grew back, her appetite returned, the attention and love they gave her is immense.

We’ve continued that love for her, she’s not afraid of people or other animals so we don’t believe she became a stray because of animal cruelty, so it’s a mystery.  Maybe her owners moved away but left her behind accidentally, who knows.

Yet I know one thing, we’re giving her as much love as a cat could want.

Even Bonnie who is doesn’t really like other cats has been accepting of Gypsy.

Maybe Bonnie senses the rough time that gypsy has had.  We estimate she’s 12, god knows how long she was a stray for.

To overcome what she had experienced, cold dark nights, no food, no home or shelter, alone.  It’s no wonder she’s not fussed by other animals, it’s as if she’s thinking that, I’ve been through hell so nothing can scare me now.

Whilst her tongue pokes out for only having one tooth, it feels like she is poking fun at the world.  I’m still here!

I love giving her a fuss, but stroking her even though her fur is back it doesn’t hide the bumps and blisters of where her skin was bare to the elements.

Here’s a picture, we only wish she could use the toilet, as she often leaves messages, warm brown ones around the house!

This is a cat who’s overcome unimaginable horrors and for that we’ll love and care for her. 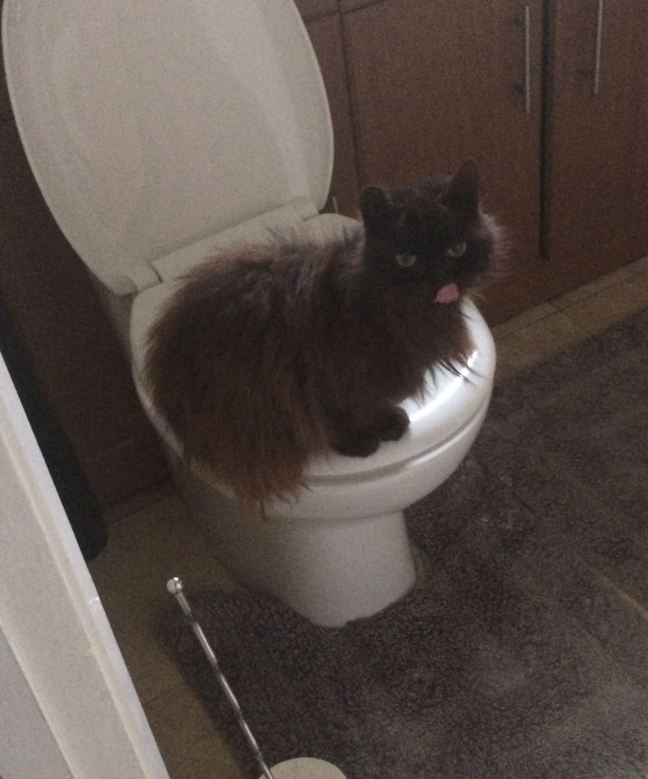